Reduce the cost and complexity of multi-computer systems using eVM for Windows embedded virtualization technology. Consolidate a headless x86 operating system with its applications onto a shared multi-core platform with Windows. eVM for Windows allows the quick and easy integration of embedded or real-time applications onto newer, more reliable, and more powerful platforms with intel Virtualization technology. The result is a simultaneous, side-by-side deployment of native Windows with embedded OSs and applications that eliminates the need for multiple compute platforms.

eVM for Windows creates separate hardware subsystems on a single platform, onto which you can consolidate your Windows and Guest OS along with new or existing applications to lower system hardware costs and reduce integration complexity.


eVM for Windows installs like any standard Windows application. Your system is integrated and up and running in minutes with all necessary services in place, enabling you to easily and quickly take advantage of the latest PC platforms for your embedded solutions alongside Windows. You can run the TenAsys VTProbe tool from our website to validate that the designated target platform is supported.

eVM for Windows common use cases

Cores are partitioned between Windows and the Guest OS. Each OS boots from its own separate cores. Both OSs have dedicated resources for maximum independence and reaction times.

Memory is partitioned and reserved for each OS. Each OS does not have access or visibility to the memory of the other OS. Each OS sees a zero-based address range. For communication and data transfer, a shared memory device and API is provided.

I/O devices are assigned to Windows by default. Devices can be passed to eVM control with the eVM Device Manager making the device only visible to the Guest OS. Critical I/O and their associated interrupts are controlled by the Guest OS with very low additional latencies. Both IRQ and MSI interrupts are supported.

Communication between the Windows OS and the Guest OS with a Virtual Ethernet port and up to 4 serial communication ports is provided by eVM for Windows. No change is required in the Guest OS as virtualized devices appear as native ports.

Easy to setup and run

Easy to setup and run

After installation of eVM for Windows using the standard Windows installer, the system’s CPU cores and memory are partitioned. eVM runs on one core with Windows running on remaining cores. The separation of cores between the two OSs is vital to preserve the performance of a real-time Guest OS, as this method prevents any CPU contention.

Explicit partitioning is the key benefit provided by eVM for Windows to host two OSs on the same platform. Each OS has its own dedicated processor cores, memory, I/O, and interrupts, keeping the OS environments separate in order to preserve the performance of each OS. There is no special boot loader, or need to re-install Windows on any supported platform.

Assign devices exclusively to the Guest OS for uncompromised performance: NO virtualization 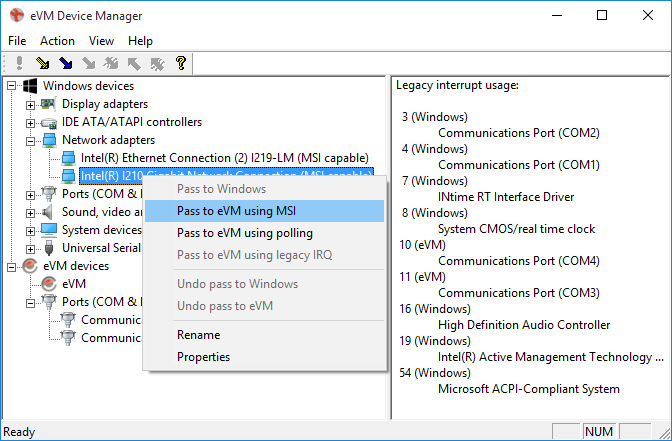 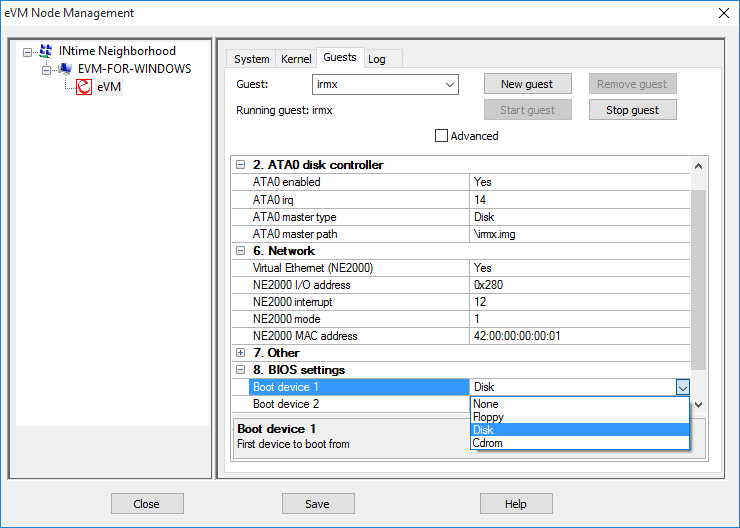 Load and run the Guest OS and application

The eVM BIOS provides the standard functionality of a PC BIOS, including all of the functions required to boot a Guest OS natively from a hard drive, floppy disk, or CDROM image.
Multiple Guest OSs can be configured and interactively started and stopped from the eVM Node Management tool.

Part of the TenAsys Software Platform

Playing a strategic part in the TenAsys embedded virtualization initiative, eVM for Windows provides for an end use model leveraging advanced consolidation with any headless x86 guest workload. Designed from the ground up to be hard real-time, eVM compliments the tenAsys Software Platform alongside use models for the INtime real-time operating system and Microsoft Windows.
learn more about INtime software and the overall tenAsys Software Platform at our website

Download and run VTProbe to validate the target system, or purchase eVM for Windows >